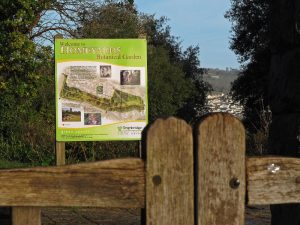 The story behind the gardens
Homeyards Botanical Gardens were created during the 1920’s and 30’s for Maria Laetitia Kempe Homeyard. Her husband William had invented and manufactured a very popular patent cough syrup called Liqufruta. They used their fortune to buy Ness Cottage at the east end of the gardens and many of the steeply sloping patchwork of fields above the picturesque village of Shaldon.
Following William Homeyard’s death in 1927 Maria continued to create not only the large private garden but also built 54 distinctive houses which completely transformed the hillside above the village. With the guidance of garden designer William Sears, Maria created an informal terraced arboretum with a level walk along the top providing many views over the Teign estuary and across Lyme Bay. Mrs Homeyard died in 1944 and there being no heirs, Teignmouth Town Council bought the gardens in 1950 for a nominal sum. In 1989 the Friends of Homeyards formed with the aim of restoring the gardens and in 2015 they helped obtain a Heritage Lottery Fund grant which has enabled significant restoration work to be carried out. Currently under the stewardship of Teignbridge District Council, admission to the Gardens is free and they are open all year round.

A book about the history, Aturfuqil’s Shaldon is available from local shops and Teignmouth Museum. The Friends of the Gardens report items of news and developments in the Gardens at : shaldonbotanicalgardens.org

Trees and plants
365 trees and shrubs were reputed to have been planted but only a few of the originals survive, among them: three fantastic Weeping Beech (Fagus Sylvatica Pendula) specimens which dominate the lawn area around the Italianate gardens, the Strawberry Tree (Arbutus X Andrachnoides) a native of Greece, and the large Monterey Pines (Pinus Radiata). More unusual recent plantings include the Maidenhair Tree (Gingko Biloba) and three Tree Ferns (Dicksonia Antarctica).

Italianate Garden
William Sears had designed the famous Italian garden at Lindridge and used a number of similar features in this area of the Homeyards Garden. From the Gardeners Hut, now a roost for lesser horseshoe bats and swallows, the central steps lead down to a rectangular lawn. Remains of a rose covered bower have recently been discovered as have broken pieces of a memorial bench and table Mrs Homeyard set up in honour of William Sears . . . ‘thoughts go deep’. This bench has now been restored. At each end of the lawn there are classical balustrades and beyond rockeries recently cleared of substantial incursions of bramble, ivy and self-seeded incomers. They are now replanted with Mediterranean style plants as they were originally.

Pond and Rill
The rill flows down through a series of three smaller ponds into the larger pond below; this was stocked with huge ornamental Japanese goldfish in Mrs Homeyard’s day. The area has recently been replanted and this water feature runs as a closed circulatory system on special occasions.

The Witches Cave
This small grotto constructed of Torquay limestone is reputed to be where ‘Old Mother Gum comes down from the woods at dusk and takes tea in her secret cave’.

The Castle
Mrs Homeyard entertained her friends to tea and bridge in this ‘summer house’. Over time it had fallen into disrepair and its lead roof was stolen many years ago. With the Heritage Lottery Fund grant in 2015 the castle has been restored and is once more in use by the community. The weather vane has been reinstated and a new flag pole proudly flies the Devon flag or our own Homeyards flag, both designed long after the castle was built.

The Lottery funding also paid for some restoration of the walls behind the castle, provision of two disabled car parking spaces and increased access around the garden for wheelchairs and pushchairs. In addition the services of a full-time gardener for the three year term of the programme enabled considerable recovery of heavily overgrown areas of the garden and a general improvement in the routine maintenance of the entire garden. Funding also paid for photographic workshops with local schoolchildren centred on the garden and encouraged the Friends to increase use of this precious asset by local groups and members of the public both local and visiting.
New tree labels have been provided along with a free trail leaflet.

Pick up a leaflet on Homeyards from Shaldon Tourism Centre in the Ness Drive car park.