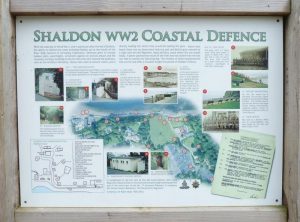 A temporary anti-aircraft gun emplacement was situated on Shaldon bridge, together with other sites including the Quay (Clipper Café), Commons Old Road and the Ness, whilst the remains of anti-tank obstacles survive in the form of sockets in the street surface within the village itself. On the Ness is the site of a World War Two emergency coastal battery, including an engine house, pill boxes, ammunition store and searchlight installations. The public air raid shelter was on the village green.  The footings can still be seen a certain times of the year.

Remains of a boom can be seen embedded in the estuary foreshore on the walk up to the Ness. This was used to secure a chain across the estuary mouth to prevent enemy shipping entering the Teign and attacking the harbour. Visit the Ness headland to see a permanent display board and map of Shaldon’s WW2 coastal defences with a fascinating insight into the role played by local residents.

Created by local resident Tim Mole to commemorate the efforts of the 362nd Coast Battery, Royal Artillery, and his father, Robin Mole and local men of No 17 Platoon (Shaldon) Home Guard.

Other evidence of Shaldon’s role in coastal defence during WW2 can be found in various parts of the village however some defences have been lost to development.
It is hoped that in the future an Heritage Trail around Shaldon tracing this significant moment in Shaldon’s history can be developed in conjunction with TDC’s Policy and Heritage department and Shaldon Parish Council.